October 14, 2019
Days and month wise National and International all important Fastival Days in 2019-2020 are clubbed together to know more about India and World events celebrated across the globe with a particular theme. Why these days are important? Let’s have a look! 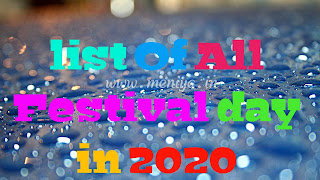 List of All important Fastival days in 2019-2020 year of national and international all importance Fastival are given below .

January is the First month of saying bye to the last year and welcoming the New Year. Isn't it. We usually set new goals, do parties, enjoy, etc. In fact weather is also cold and pleasant. Do you know that January month name was derived from the Roman god Janus, the protector of gates and doorways? That is why January is presided over the gate to the New Year. Janus basically is depicted with two faces, one looking into the past and the other into the future. Let us study about important days, events and festivals that fall in the month of January 2019-2020.