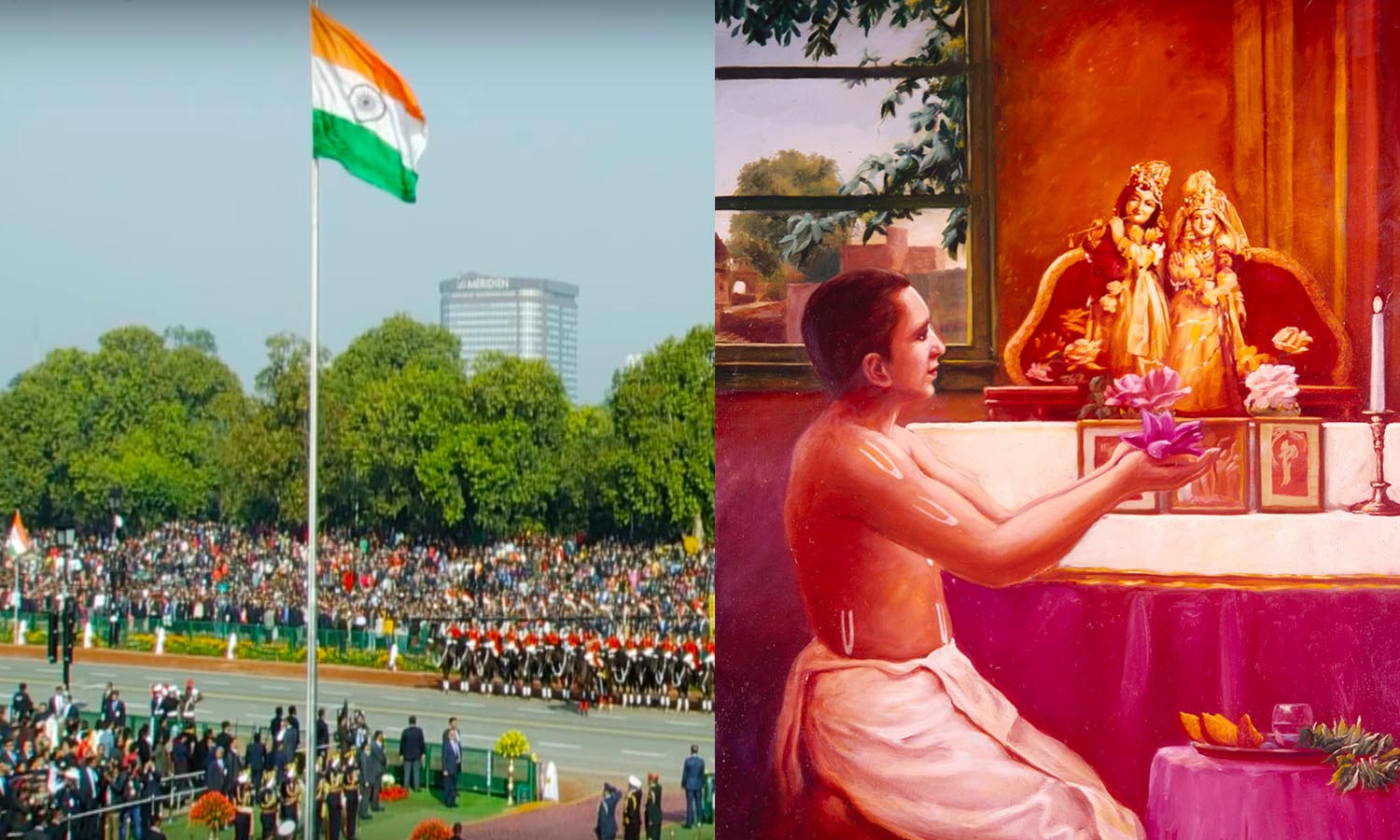 As India celebrates its 71st Republic Day, let us reflect on our original constitutional position,explained in the Universal Book of Constitution: Bhagavad-Gita!

India celebrates its Republic Day on January 26th every year. In the year 1950, on this day the Constitution of India came into effect replacing the Government of India Act (1935). The constitution ensures India as a secular, sovereign, socialist, democratic republic, assuring its citizens’ justice, equality and liberty, and fraternity. Dr. Bhimrao Ramji Ambedkar is honored as the Father of the Indian constitution. The Republic Day commemorates the date on which the Dominion of India became the Republic of India.

The Constitution of India is the supreme law of India and is also the longest written constitution of the world. It directs the core instituting the political code, structure, procedures, powers, and duties of government institutions and sets out fundamental rights, directive principles, and the duties of citizens.
There are two types of citizens, one who abides by the constitutional law- are free citizens and the ones who don’t- are criminals.
Similarly, on the universal existential plane, as explained in the Vedic literature, there are living entities who are always engaged in devotional service and are called Nitya muktas. They are the permanent citizens of the Spiritual World. There are those who act against the will of the Lord, and hence have to be imprisoned in the prison house called the material world (duḥkhālayam aśāśvatam) like the criminals.

Chaitanya Mahaprabhu taught, jīvera ‘svarūpa’ haya-kṛṣṇera ‘nitya-dāsa’ – It is the living entity’s constitutional position to be an eternal servant of Krishna. Without service, we have no other business. Because our constitutional position is to serve Krishna and we are serving so many other things, which is mäyä, therefore we are not happy.
Lord Krishna in Bg. 15.7 says, mamaivāṁśo jīva-bhūtaḥ: “jīva, the living entity, they are My part and parcel.” So each one of us, we are part and parcel of God. So we have got some duty. Just like the part and parcel of our body has got. Just like the eyes, it must see, the ear, it must hear. So we, being part of Krishna, our only duty is to serve Krishna.
The word ‘dharma’ in Vedic parlance means the ‘inseparable and intrinsic property of a substance’, like ‘liquidity’ is the ‘dharma’ of water, or ‘sweetness’ is the ‘dharma’ of sugar. The living entity’s ‘dharma’ is to ‘serve’. Once having understood our ‘dharma’ or the ‘constitutional position’, it is only appropriate to perform our duties as a law-abiding citizen of God’s Universal Existence. As Srila Prabhupada says, “When we understand our actual position, then our activities begin.”  This, Republic Day, let us pledge to engage in our eternal constitutional duty of service to the Supreme Lord, as much as rendering our constitutional duties towards our nation, The Indian Republic.
Jai Hind.
Hare Krishna.
26 January 26 January 2021