A Letter to Gandhiji by ‘An unknown friend’

A Letter to Gandhiji by ‘An unknown friend’ 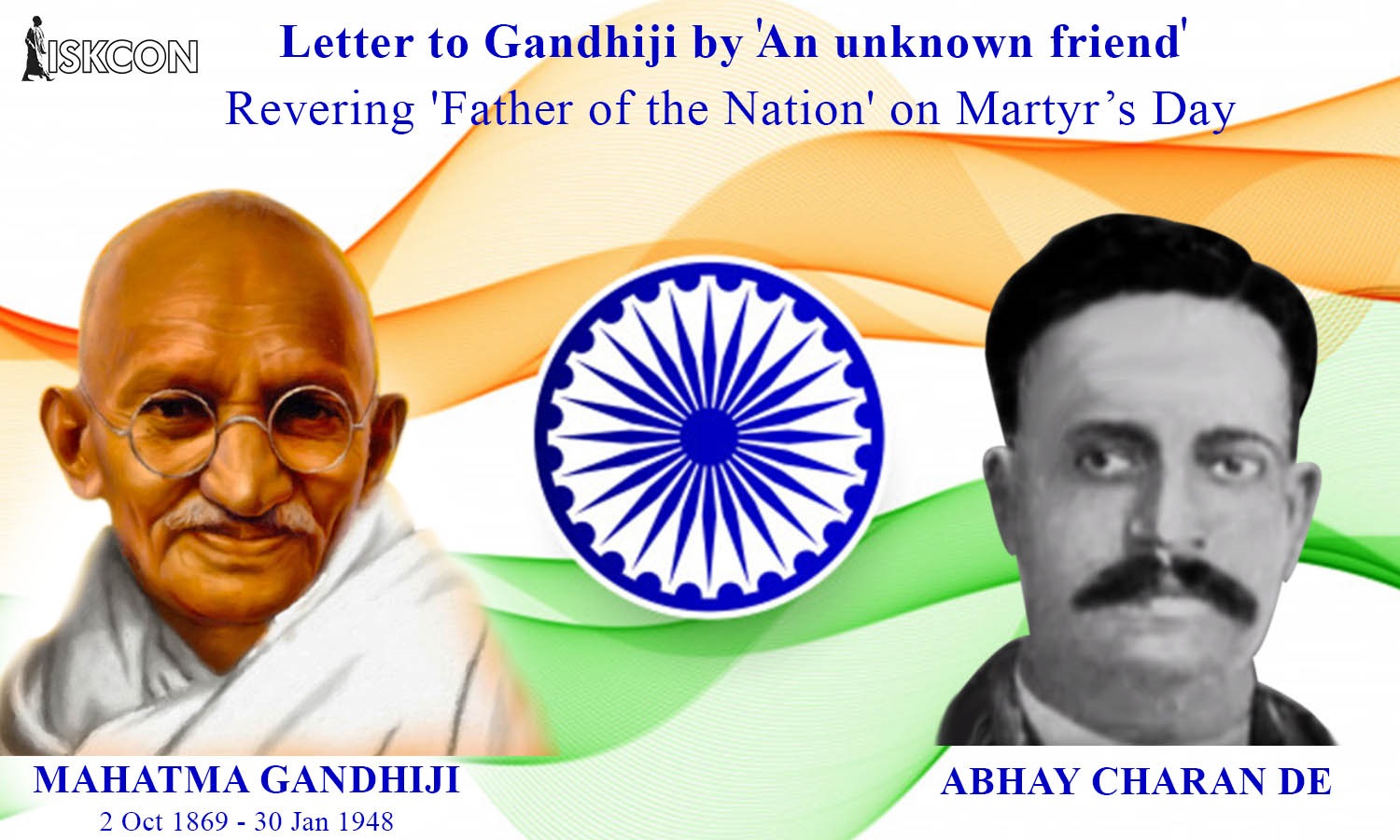 Every year on January 30, India celebrates ‘Shaheed Diwas’ or ‘The Martyrs Day’ in the loving memory of Mahatma Gandhiji. A month before this tragic happening, Srila Prabhupada, at that time, Abhay Charan De, unknown to the world, wrote a letter to his ‘Unknown Friend’ Mahatma Gandhiji.
His Divine Grace A C Bhaktivedanta Swami Prabhupada, Founder Acharya of the International Society for Krishna Consciousness (ISKCON) fondly known as Srila Prabhupada by his disciples, achieved the success of the worldwide ‘Hare Krishna’ revolution in the last twelve years of his life.
However, when he was a young householder, Abhay Charan De, idolized the Father of Nation, and the greatest icon of those times, in the pre-independence era ‘Mahatma Gandhiji’. The turning point of his life though came in 1922, when he met his Spiritual Master Srila Bhaktisiddhanta Sarasvati Thakura, after which he became a Vaishnava spiritualist, from being a Gandhian Nationalist.
Abhay Charan De started a magazine named ‘Back To Godhead’ in order to communicate the message of the Vaishnava philosophy in the contemporary age to the English speaking world, as ordered by his Spiritual Master. He always made it a point to reach his magazine to the leaders of the society of the day, such as Pandit Jawaharlal Nehru, C R Das, and his long time role model Mahatma Gandhiji.
Abhay had a special feeling for Gandhiji because of his lifetime of courageous, ascetic, and moral activities. Gandhiji’s idea of serving God was to try to bring happiness to man through politics and his methods of ahimsa. He was a saint amongst the politicians.
The historical year of 1947, when India was at the cusp of independence were also days of Hindu-Muslim rioting, after the Partition. His secretary Pyarelal Nayar, described Gandhiji at this time as “the saddest man one could picture.” All his programs-Hindu-Muslim unity, nonviolence, upliftment for the poor, although praised throughout the world, were failures in the India of 1947.
Abhay felt his old friendship for Gandhiji, even though Gandhiji was a towering figure of worldwide fame and Abhay unknown both to Gandhiji and to the world at that time.
On 12 July, 1947, Abhay sent a letter, to his ‘unknown friend’, Gandhiji. He knew that in all likelihood, his letter would never reach Gandhiji. Sending a letter to Gandhiji would be like putting a note in a bottle and sending it to sea. It would arrive in the flood of mail, and Gandhiji would be too busy to see it. But he sent it nonetheless.
Dear Friend Mahatmajee,
“Please accept my respectful Namaskar. I am your unknown friend but I had to write to you at times and again although you never cared to reply them. I sent you my papers “Back to Godhead” but your secretaries told me that you have very little time to read the letters and much less for reading the magazines. I asked for an interview with you but your busy secretaries never cared to reply this. Anyway, as I am your very old friend although unknown to you, I am writing to you in order to bring you to the rightful position deserved by you. As a sincere friend I must not deviate from my duty towards a friend like your good self.
I tell you as a sincere friend that you must immediately retire from active politics if you do not desire to die an inglorious death. You have 125 years to live as you have desired to live but if you die an inglorious death it is no worth. The honour and prestige that you have obtained during the course of your present lifetime, were not possible to be obtained by anyone else within the living memory…  But none of you neither your friends nor yourself know this truth.”
Recognizing Mahatma Gandhiji’s godly qualities, Abhay requested him to engage in devotional service because the Bhagavad Gita defines a Mahatma as one who fully engages in worshipping Lord Krishna as the Supreme Personality of Godhead, always chanting His glories. The Mahatma encourages others to surrender to Krishna. Gandhiji also had great power to influence the Indian masses. So Abhay wanted Gandhiji to preach Bhagavad Gita taking a brief retirement from politics.
“… you must give up the rotten politics immediately and rise up for the preaching work of the philosophy and religion of “Bhagavad-gita”…
I would only request you to retire from politics at least for a month only and let us have a discussion on the Bhagavad-gita. I am sure, thereby, that you shall get a new light from the result of such discussions not only for your benefit but for the benefit of the world at large—as I know that you are sincere, honest and moralist.”
Abhay dutifully attempted to save his friend but there was no reply. On this day, January 30, the day after Gandhiji had drafted a new constitution for the Congress Party, while walking towards his evening prayer meeting, was shot three times in the chest. He died, crying out the name of God – “He Rama!” Abhay’s letter of the previous month suddenly read like a prophecy.
You may also read the full letter of Srila Prabhupada to Gandhiji, here…
Gandhiji mahatama ghandhi