Diwali 2019 will be celebrated on 27th October in most parts of India, while in other parts, it will be celebrated on the 29th of October. The festival and its celebrations usually last for five days (Dhanteras, Choti Diwali, Badi Diwali, Govardhana Puja, and Bhai Dooj), among which the third day is the main day, celebrated as Diwali. During all the five days houses, temples and public spaces are first cleaned up, then are beautifully decorated and lit up with artificial lights and earthen lamps (diyas). The children celebrate this festival by lighting up fireworks, as it signifies the way to chase away evil spirits.
5 days of Diwali
Significance
Lakshmi Puja
Rama’s return to Ayodhya
Damodara Lila
The 5 Days of Diwali

The first day of Deepavali (Dhanteras) denotes the arrival of the new financial year for most Indian business class. It falls on the 13th lunar day of Krishna Paksha according to the Vedic calendar month of Kartika. This is the day that most people go out to buy new things like utensils, gold coins, and jewellery.

On the occasion of Dhanteras, Dhanvantari, the God of Ayurveda who imparted this Vedic science of medicine for the betterment of humanity is worshipped. According to ancient texts, when the Gods and demons performed the churning of the ocean (Samudra Manthan) for the divine nectar of immortality (Amrita), Dhanvantari (an incarnation of Lord Vishnu) appeared carrying a jar of the nectar, on the day of Dhanteras. 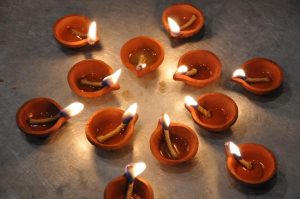 The second day of Deepavali (Choti Diwali) is the day of cleansing. People after cleaning their homes, take bath and wear new clothes. On this day people have good times as they throng the markets to purchase sweets while some prepare it themselves for their guests, friends, and family as they wish them good health, success, and prosperity.

The Naraka Chaturdashi falls on this day. Click here to know more. On this day, one executes Yamatarpan, that is, offering to the deity of death (Lord Yama) after an auspicious bath (bath with an oil massage) to overcome untimely death. Thereafter, the mother does arati for her children to commemorate the celebration of Lord Krishna’s victory over Narakasura.
The third day of Diwali (Badi Diwali or main Diwali) is the darkest day of the month (Amavasya), the new moon day. It is the main day of the Deepavali. Lakshmi Puja is carried out on this day by those who don’t perform it on the 1st day of Deepavali. On this day, in West Bengal, Odisha and Assam, the Goddess Kali is also worshipped. The childhood pastime of Lord Krishna – Damodara Lila – wherein He broke the pot of yogurt and was bound by mother Yashoda, took place on this day of Diwali. Read the wonderful pastime of Damodara Lila in our blog.

The fourth day of Deepavali is celebrated as the Govardhan Puja and Bali Pratipat.

The fifth day of Diwali (Bhrātṛ-dvitiyā or Bhai Dooj) denotes the love between sisters and brothers. On this day, sisters put a tika, a mark on brother’s forehead, and brothers’ offer them gifts while vowing to protect her, forever.
Significance of Diwali or Deepavali

The word Diwali is derived from the Sanskrit word of Deepavali, which means a “row or a string of lights”. Diwali or Deepavali marks the victory of light over darkness. There are many different historical events and stories co-relating to this beautiful festival.

As different cultures celebrate Deepavali in their own ways and traditions, the only thing common is that it is celebrated on the 20th day after Vijaya Dashami. Some celebrate this festival because Lord Rama returned to Ayodhya on this day after an exile of 14 years while some others celebrate Deepavali by worshipping Goddess Lakshmi or Goddess Kali.
Lakshmi Puja 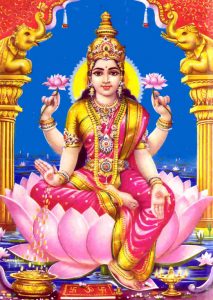 Deepavali is perhaps the most important and ecstatic festival, celebrated by Indians all around the world. On the third day of Diwali (some on the first day itself), people worship Goddess Lakshmi seeking her blessings to attain wealth and prosperity.

This is the main day during the five-day festival and is also known as the day of Goddess Lakshmi. This is because Goddess Lakshmi, the Goddess of wealth and prosperity, is worshipped on this day. Before the commencement of the puja, it is important to cleanse and purify the space where the Puja is being carried out, as it is believed that Goddess Lakshmi will only enter the cleanest houses. Some perform Vaibhava Lakshmi Vrata (fast) for only one day as it is believed that doing a fast on Diwali gives the benefits of 21 equivalent fasts. Then the family gets together and recites prayers together and they offer many offerings such as sweets to the Goddess. As the Arati concludes, everyone takes blessings from the Goddess and then indulges themselves in sweets. Sweets are the main attraction of this festival as this is the time to meet and greet friends, family and relatives, and exchange gifts and sweets.
Rama’s return to Ayodhya

Rama along with Sita and Lakshman, and with all the monkeys aboard, flew to Ayodhya on the godly chariot, Pushpaka. The chariot was then stopped in the ashram of great sage Bharadväja. On Rama’s request, he meditated and, by his mystic power, all the trees for twenty miles around Ayodhya became heavy with fruits. Hanuman was then sent as a messenger to inform Bharata with the news of Rama’s return. Bharata was continuously chanting Rama’s name. Hearing the news he was overwhelmed with joy. 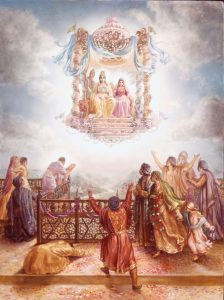 As the news spread, the entire city of Ayodhya began to prepare the grand welcome of Rama. The blast of conches and the roll of drums was tumultuous. A great roar came from the huge crowds, and it appeared as if the entire population of Ayodhya had come out of the city, all hoping for a glimpse of Rama. The city streets were beautifully decorated with flags and garlands. From the balconies of the mansions, women threw handfuls of flower petals and parched rice. Rama looked around at everyone and smiled, raising His hand in blessing. Gandharvas sang while the Apsaräs danced their mind-stealing dances, filled with movements and gestures deep with meaning. The huge crowds cried out “Victory to Rama!” and “All glories to Sita and Rama!”

This is continued as a ritual till today as every year on the 20th day after Vijaya Dashami people celebrate Deepavali, the festival of lights to mark Rama’s return.
deepawali diwali images diwali photos diwali status happy diwali happy diwali 2021