How to Gain Self Control in Kali-yuga

How to Gain Self Control in Kali-yuga

Gaining self-control is a real challenge for anyone in Kali-yuga. The solution is to change your lifestyle. Read on to know more. 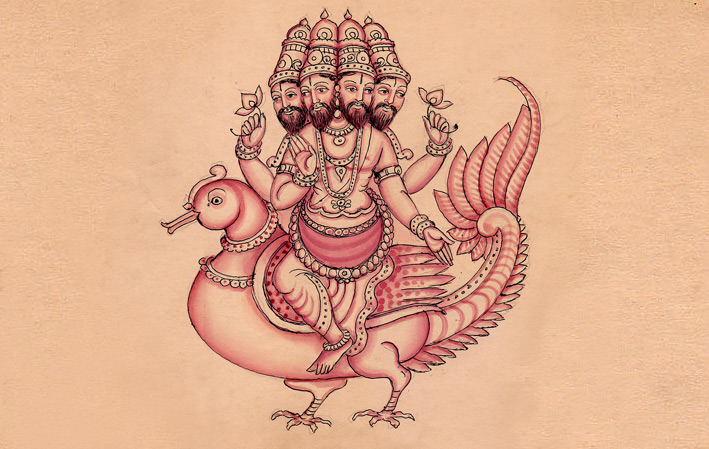 prahasya bhava-gambhiramjighrantyatmanam atmanakantya sasarja bhagavangandharvapsarasam ganan
Translation: With a laugh full of deep significance, the worshipful Brahma then evolved by his own loveliness, which seemed to enjoy itself by itself, the hosts of Gandharvas and Apsaras.
Context: Brahma is the secondary creator of the universe who is entrusted with the duty of populating the material world with different types of living entities. Here we see that Lord Brahma created the Gandharvas (musicians who live in the higher planetary systems) and Apsaras (dancing girls in the heavenly planets) out of his own loveliness.
In the purport to this verse, Srila Prabhupada elaborates: Music and dancing employed in sense gratification are to be accepted as demoniac, but the same music and dancing, when employed in glorifying the Supreme Lord as kirtana, are transcendental, and they bring about a life completely fit for spiritual enjoyment.
This material world is created by the Lord for those who want to enjoy their senses. There are different levels of sense enjoyment – subtle to gross. In the heavenly planets, enjoyment is predominantly on the subtle level and in the lower planetary systems it is predominantly at the gross level.
The scriptures tell us that the Lord is the supreme enjoyer, and the living entities are meant to take part in His enjoyment through service to Him and not by trying to enjoy separately.

Association with Modes of Material Nature

The living entities are wandering from one planet to another, transmigrating from one body to another, trying to experience varieties of sense enjoyment, but all their attempts meet with frustration. The more one tries to enjoy, the more one is frustrated.
In the Bhagavad-gita, Sri Krishna says:
karanam guna-sango sya sad-asad-yoni-janmasu
Because of attachment to material existence, the living entity is constantly transmigrating from one body to another, born sometimes as a demigod, sometimes as a man, sometimes as a beast, as a bird, as a worm, as an aquatic, as a saintly man, as a bug, etc. 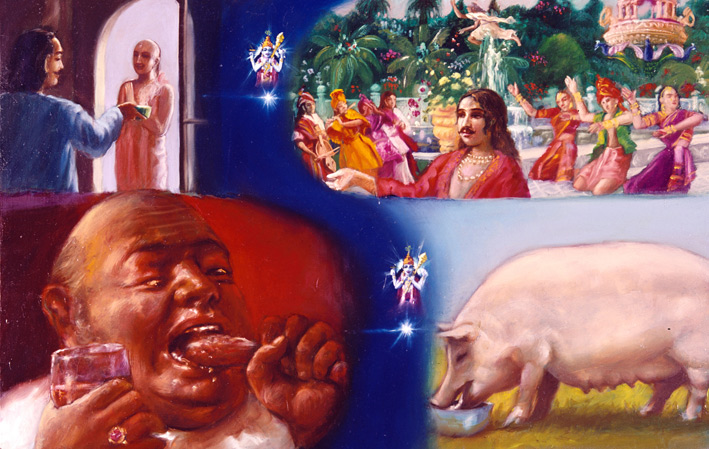 Even at the time of dissolution, the desire of the living entities to enjoy their senses and lord over material nature does not subside. Thereby the conditioned living entities remain merged within the spiritual existence of the Lord, as if in deep sleep, and then again come out at the time of cosmic manifestation to be awarded different types of material bodies by Lord Brahma. Thus they appear in different species of life.
This is confirmed in Bhagavad-gita by Lord Sri Krishna:
sarva-bhutani kaunteyaprakrtim yanti mamikamkalpa-kshaye punas tanikalpadau visrjamy aham
At the end of the millennium all material manifestations enter into My nature, and at the beginning of another millennium, by My potency, I create them again. (Bhagavad-gita 9.7)
One day of Brahma (called kalpa) is calculated as 4,300,000,000 of our earthly years and his night is of the same duration. At the end of each kalpa, all living entities along with the material manifestations rests in Lord Vishnu, and again in the beginning of the next millennium they are manifested again by the potency of the Supreme Lord.
The spirit soul is pure in nature. But due to its association with the three modes of material nature, the living entity becomes conditioned.
karanam guna-sango ‘sya – and thus it takes birth in different species of life – sad-asad-yoni-janmasu.

Change Your Lifestyle – Be in the Mode of Goodness

Transcend the Modes of Material Nature

But Krishna Consciousness offers a different approach of transcending the modes of material nature: sa gunan samatityaitan.
In this process we engage ourselves in various devotional activities like: 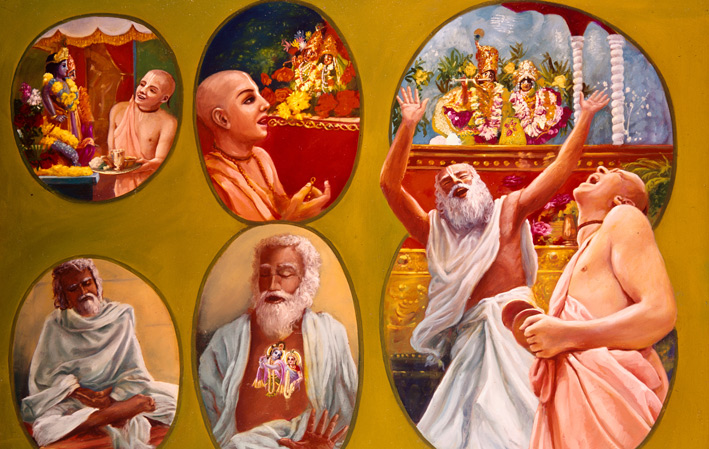 It is stated in the Chaitanya-charitamrita:
kali-kale nama-rupe krishna-avatara (CC Adi 17.22)
In this Age of Kali, the holy name of the Lord is the incarnation of Lord Krishna.
The Supreme Lord Krishna and His names are non-different. Thus we can associate with the Lord by chanting the Hare Krishna maha-mantra.
sattvam vishuddham vasudeva-shabditam (Srimad-Bhagavatam 4.3.23)
Lord Krishna is the reservoir of vishuddha sattva (pure goodness) which is beyond the three modes of material nature. He is pure goodness, pavitram.
Therefore when we associate with the holy names by chanting the Hare Krishna mantra: Hare Krishna Hare Krishna Krishna Krishna Hare Hare – Hare Rama Hare Rama Rama Rama Hare Hare, we will be influenced by transcendental goodness (vishuddha sattva) and transcend the three modes of material nature.
Lord Krishna being the Supreme Absolute, His form, qualities, pastimes and everything else related to Him is non-different from Him. The food offered to Krishna is also non-different from Krishna.
In the Bhagavad-gita (3.13) it is stated that:
yajna-shistashinah santo muchyante sarva-kilbishaihbhunjate te tv agham papa ye pacanty atma-karanat
The devotees of the Lord are released from all kinds of sins because they eat food which is offered first for sacrifice. Others, who prepare food for personal sense enjoyment, verily eat only sin.
Prasadam or the food which is offered to Krishna is spiritual; it is the mercy of the Lord and is non-different from Him. If we take only Krishna prasadam, then we will be gradually purified and thus become free from the influence of the lower modes.
It is said in the Srimad Bhagavatam:
nasta prayeshu abhadresu nityam bhagvata sevayabhagavati uttama shloke bhaktir bhavati naishthiki
By regularly attending classes on the Bhagavatam and by rendering service to the pure devotee, all that is troublesome to the heart is almost completely destroyed, and loving service unto the Personality of Godhead, who is praised with transcendental songs, is established as an irrevocable fact.
tada rajas-tamo-bhavah kama-lobhadayas ca yeceta etair anaviddham sthitam sattve prasidati
As soon as irrevocable loving service is established in the heart, the effects of nature’s modes of passion and ignorance, such as lust, desire and hankering, disappear from the heart. Then the devotee is established in goodness, and he becomes completely happy.
Thus Krishna consciousness is the direct method of transcending the modes of material nature. When one practices Krishna consciousness, his faith, austerity, charity, renunciation, happiness, knowledge, determination, etc., will automatically rise from tamo guna to rajo guna and from rajo guna to sattva guna. In this way, one will be elevated from lower modes to higher modes.

In this Kali-yuga, there is no hope of controlling the senses. From everywhere we are bombarded with objects that attract our senses and thus everyone is bewildered. It is very difficult to give up sense-gratification because the senses are very powerful.
indriyani pramathini haranti prasabham manah (Bg 2.60):
The senses are so strong and impetuous that they forcibly carry away the mind; even of a man of discrimination who is endeavoring to control them.
Therefore the only way to control the senses is to move to the higher guna by engaging in devotional service and associating with devotees. 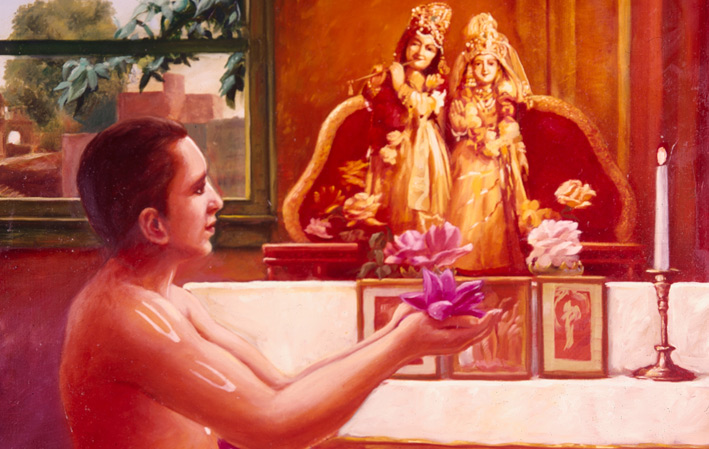 An iron rod put in the fire gradually becomes red hot and acquires fiery qualities because of the transfer of energy from fire. The Supreme Lord is sat-cit-ananda vigraha: the eternal form full of knowledge and bliss. Being part and parcel of Krishna, we also have the same qualities.
When we associate with the fire of sat-cit-ananda by chanting His holy names, taking prasadam, hearing His glories, etc., we can realize our sat-cit-ananda qualities.
Remember: Never leave the association of the Lord which is so easily available to us in this degraded age of Kali-yuga in the form of chanting and hearing —
hare krishna hare krishna krishna krishna hare harehare rama hara rama rama rama hare hare
Spiritualize yourself so that the lower modes cannot touch you. Then, the process of self-control becomes very easy.
How to Gain Kali-yuga