Naraka Chaturdashi falls on the 14th day of the Krishna Paksha in the Vedic calendar month of Ashvin. It is the second day of the five-day-long festival of Deepavali, widely celebrated as the festival of lights. The festivity, just like Dussehra marks the victory of Good over evil, as Lord Krishna, the Supreme Personality of Godhead ended the terror of Narakasura. This year Naraka Chaturdashi will be observed on October 27, 2019.

Celebrations
In the Northern parts of India, the day of Naraka Chaturdashi is also called Choti Deepavali and the festivities are performed in the night. In some parts they worship Lord Ganesha and a few other places effigies of Narakasura are set ablaze on this day representing the end of evil within us.

In the South, people celebrate the festivity during the day. They wake up early in the morning and have a holy bath using ‘ubtan’ (a paste of natural ingredients), they then apply a mix of ‘kumkum’ and oil over their foreheads, before proceeding for prayers to Lord Krishna. It is believed that worshipping Lord Krishna on this day brings immense good luck, prosperity and wards off any evil presence in life. This also rids one of their
sins.
Do you know, Lord Krishna had 16,108 wives?

In the Bhaktivedanta purport of the Fifty-ninth Chapter of Krishna, “The Deliverance of the Demon Bhaumasura,” His Divine Grace Srila Prabhupada blissfully narrates the story of Bhaumasura.

Bhaumasura, who was also known as Narakasura, was the son of the earth personified. Narakasura, having become very powerful, took by force the umbrella from the throne of the demigod Varuna. He also took the earrings of Aditi, the mother of the demigods. He conquered a part of heavenly Mount Meru and occupied the portion known as Maṇi-parvata. The King of the heavenly planets, Indra, therefore came to Dvaraka to complain about Narakasura before Lord Krishna.

Hearing this complaint by Indra, Lord Krishna, accompanied by His wife Satyabhama, immediately started for the abode of Narakasura. The two of them rode on the back of Garuda. The Demon’s city appeared well protected even in terms of today’s scientific advancements.

First of all, four strongholds were guarding the four directions of the city, which was well protected on all sides by formidable military strength. The next boundary was a water canal all around the city, which was environed by electric wires. The next line of defence was of ānila, a gaseous substance. After this, there was a network of barbed wires constructed by a demon named Mura.

When Krishna arrived, He broke all the strongholds to pieces and with His celebrated Sudarshana chakra He counteracted all the barriers. The vibration of Lord Krishna’s conch shell sounded like a thunderbolt. The roar awakened demon Mura from his sleep.

Demon Mura had five heads and had been living within the water for long. The blaze of his body was so dazzling that it was difficult to see him with open eyes. As he came out, he took out his trident and rushed toward Krishna. Soon Lord Krishna, with His Sudarshana chakra, separated the demon’s five heads from his body. Mura fell dead into the canal.

Demon Mura had seven sons, and by order of Narakasura, all of them together attacked Krishna unaware that the Supreme Personality of Godhead is invincible. All of them instantly had been sent to the abode of Yamaraja, the superintendent of death.

When Narakasura saw that all his soldiers, commanders and fighters, had been killed on the battlefield, he came out for the fight. He then saw that Lord Krishna with His wife was beautifully seated high in outer space like a blackish cloud about the sun, glittering with the light of electricity. Narakasura immediately released a weapon called Śataghnī, which could kill hundreds of warriors with its one stroke, simultaneously his assistants released their, at Lord Krishna. As the outcome of such stupidity, firstly all the weapons released by them, were destroyed and then all of the soldiers and commanders fell to the ground as their arms, legs and heads got separated from their bodies.

Narakasura remained alone on the battlefield, and he engaged himself in the fight with Krishna. Later Narakasura realised that none of his tricks would act upon Krishna, he became aware that all his attempts to kill Krishna would be frustrated. Yet he tried for the last time; with a trident in his hand he set himself to strike Krishna. The Lord was so quick that before Narakasura could throw his trident, his head was cut off by the sharp Sudarshana chakra. His head, illuminated by earrings and a helmet, fell on the battlefield. Witnessing this, the remaining Demons wailed in disappointment and the saints glorified the heroics of the Lord.

In the palace of Narakasura, Lord Krishna saw 16,100 young princesses, who had been kidnappe 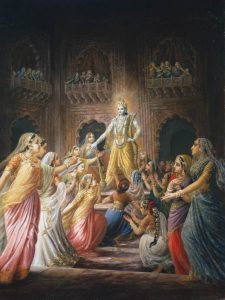 d and held there. As the princesses saw the Supreme Personality of Godhead, Krishna, in the palace, they were immediately attracted by the beauty of the Lord.

All the princesses in captivity were immediately released, but they refused to return to their respective houses, as they feared criticism and social rejection, for they had to live with a demon king. As the Super-soul, one who is present in everyone’s heart, Krishna could understand their heart’s desire to accept only Lord Krishna as their husband. At that point, Lord Krishna decided to marry all of them and give them the status of his wives. Sincerely, they offered their hearts to the lotus feet of Krishna with an unalloyed devotional attitude.

Lord Krishna then expanded Himself in 16,100 forms and simultaneously wedded them all, in different palaces at the same auspicious moment. Lord Krishna, by then, had eight queens and thus the Supreme Personality of Godhead accepted 16108 best of the devotees, as his wives. All the palaces of 16,108 queens of Krishna, were filled with suitable gardens, furniture and other paraphernalia, of which there is no parallel in this world.

The fact to be noted that, the queens of Krishna too were all expansions of the goddess of fortune, Lakshmi. Krishna lived with them in different palaces, and He treated them the same way an ordinary man treats his wife.
Naraka Chaturdashi